This guide is intended for all those studying nursing and related disciplines. 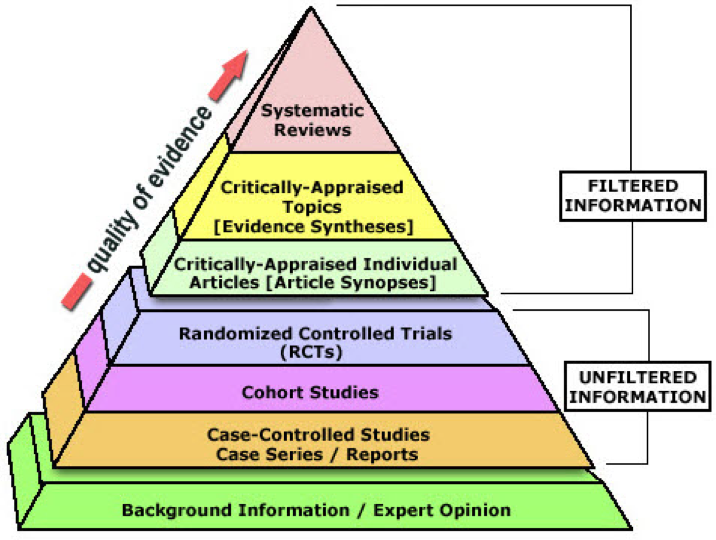 The levels of evidence pyramid is a representation of different types of articles and literature available for evidence-based practice. The highest quality evidence is at the top while individual studies are closer to the bottom. Each type of study can be useful, but it’s important to understand each before deciding what is best to use in a given situation.

Systematic reviews are those that address a specific research question. The authors carefully review existing articles on the topic, remove any that are of poor quality, and make recommendations based on their findings. These are usually performed as part of a meta-analysis.

Critically-appraised topics, or evidence syntheses, are mini versions of systematic reviews. The authors evaluate a few articles and make suggestions from them.

Authors of critically-appraised individual articles evaluate and summarize individual research studies. As with the above levels of evidence, they can be considered filtered information because the author who is performing the review is also an expert in the field.

In contrast to systematic reviews and other filtered information, unfiltered sources are those that focus on a single study conducted by the same researcher(s) who wrote the article describing it. One example is the randomized control trial, in which study participants are placed into two or more groups. One group, usually called the control or placebo group, does not receive the treatment or intervention at all, while those in other groups receive the treatment. This is done to determine the treatment’s effects versus no treatment.

Another example is the cohort study, which looks at a group of people over time. Usually, those that track people from the beginning of the time period studied are generally more reliable than looking at a group of participants after the time period being studied has passed. This type of study does not employ an experimental design.

A case-controlled study looks at a group of people who have experienced the same event versus another group that did not. This is usually used to see how the event occurred along with its impact.